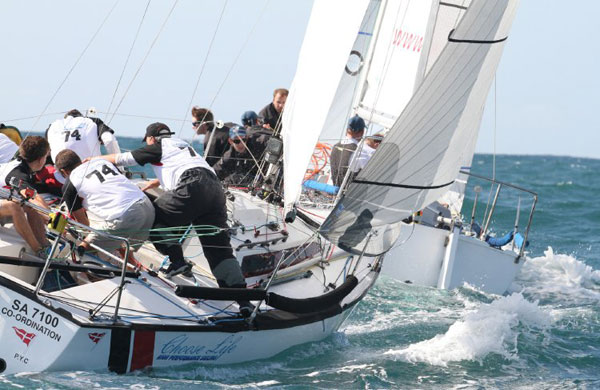 From the start the guys from False Bay Yacht Club stuck with PYC’s every move, sailing inshore on the first beat to the weather mark. The inshore route paid off handsomely for the two boats as they rounded the mark with the remainder of the fleet a minute behind. Giovannini rounded first with Weddell just on this tail, 15 seconds off.

The positions remained unchanged for the next two laps between the first two yachts. Royal Cape Yacht Club sailed a cracker of a race, having rounded the first mark in sixth position. Greg Davis and his team changed gears working their way up the fleet. On the second rounding at the bottom marker, RMS Harbour Lights came around in third position just 20seconds behind Choose Life Co-Ordination.

On the third beat, Davis went inshore while Instasure and Choose Life Co-Ordination competed in a tacking duel going offshore.  At the weather mark Instasure had a fantastic line coming into the lay line, having broken away from Weddell. Davis came up from the corner of the course, tacking around the buoy just on Intasure’s tail, putting Weddell in third.

For the final lap the top three yachts raced their hearts out. At one stage, it looked like RMS Harbour Lights had pulled into the lead but nearing the finish False Bay Yacht Club powered across the line with Royal Cape Yacht Club in second, dashing the hopes of the local lads sailing for Point Yacht Club. The trophy and the event will be competed for in False Bay.

“We are euphoric; it is an emotional relief having won. We can all relax now!” said a delighted Andrea Giovannini.

“Out of the five races we managed to beat our main competition four times but our seventh on the second day put us in a bit of bother.” This is not the first time the two successful skippers have come back from a disappointing seventh. In 2011 the duo won the regatta held in Mossel Bay having sailed a seventh in the first race. “We have been against the ropes before and came from behind. Second time we have done that, but I would like to race in this regatta and experience an easier win!” Giovannini commented.

The co-skippers are the only two remaining members from the 2011 winning team. “This has been a five year campaign for us, and we have done extremely well! Our records are a third, a second, a first, a fifth and now this memorable first.”

Markus Progli stated, “For us every year we have gone into the Lipton with the ambition of beating Greg, he has always been our arch rival as he is the guy to beat!”

Giovannini is taking a back seat from the Lipton campaign, giving Progli the reins. “I love this event, but it takes too much time and I need to focus on work. But I will definitely return.”

A disappointed Richard Weddell complimented False Bay Yacht Club’s racing, “They sailed really well! We sailed our hearts out but it wasn’t to be!”